Who wins the stimulus sweepstakes? 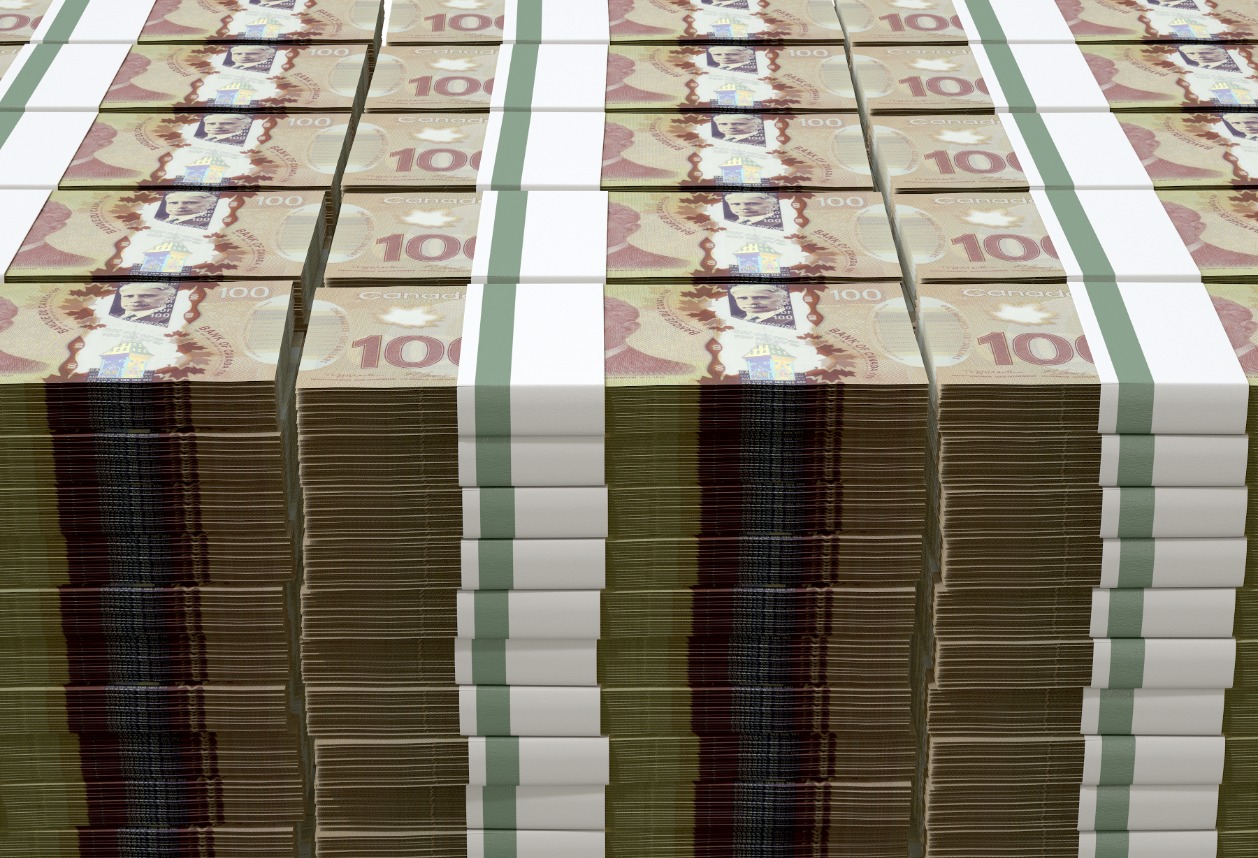 Key sectors and markets that are likely to outperform

A record amount of government money continues to pour into the economy, but as the recovery takes further hold not all parts of the equity market will profit equally from the ongoing influx of support, nor is it guaranteed that the benefits will forever outweigh the costs. Fiscal stimulus measures in the United States and around the world have been a major catalyst in pushing stock markets higher over the past year. Is there a limit to its positive effect on stocks?

No doubt there is a limit, but there’s still room for stocks to climb higher before that limit is reached and fiscal stimulus becomes more of an absolute headwind. Take the past few weeks as a case in point. The S&P 500 Index and other broad-based global indexes were reeling a bit heading into March, but then got a boost once it was clear another US$1.9 trillion in stimulus was going to be approved by U.S. Congress.

Of course, it was inflationary fears and rising bond yields brought on by so much stimulus that had investors spooked in the first place, but even though investors are beginning to recognize the risks of more and more government spending, those risks – at least for now – are being viewed through a longer-term lens and are mitigated by the shorter-term benefits that more stimulus provides.

For example, in the case of the U.S., March stimulus cheques combined with an increasing pace of vaccinations – and therefore greater economic re-opening – will likely result in outsized spending growth over the next few months as pent-up demand created by the lockdowns gets released. Moreover, this favourable cost/benefit should continue for some time yet – especially if some estimates suggesting upwards of 50% of the new U.S. relief bill will eventually end up in the equity market once fully deployed prove right.

When is enough enough?

When, then, does this stimulus become more of a problem? That’s difficult to pinpoint exactly, but one of the concerns facing investors beyond rising inflation expectations and which may not be that far down the road is the prospect of higher taxes. Governments must find a way to pay for their unprecedented spending commitments, and the most logical way to do that is by generating more in tax revenue.

U.S. President Joe Biden, for example, is already floating the idea of a very significant package of tax hikes – and new infrastructure spending as well. And while it’s still very much up in the air as to whether he can get his current proposal passed through U.S. Congress, many investors are no doubt paying close attention to the rhetoric circling in Washington, D.C. right now and will be increasingly reactive to the details that emerge in the weeks ahead.

By some estimates, higher corporate taxes could reduce earnings by 4% to 6%, while higher personal income taxes could act as a headwind to consumption and similarly impact the earnings of companies exposed to the consumer. So the equity market may have to contend with the negative impact to earnings as we move toward the second half of the year and begin to pay for some of this stimulus.

In the interim, what parts of the equity market are likely to benefit most from the continued accommodation of governments and central banks? There has already been a significant shift in what has led the market higher over the past few months as opposed to the early part of the recovery.

As most people likely recall, it was growth stocks that led the charge off the bottom last spring and through the summer as investors piled into stay-at-home technology stocks that were clear beneficiaries of the economic lockdowns put in place. By the fall, however, that trade started to give way to one characterized by value stocks, and cyclical areas of the market started to perform better on the promise of vaccine rollouts and a slow return to economic normalcy. If anything, that bias has only become more accentuated in recent weeks, and it’s very likely to persist for as long as it takes the economy to fully recover and move deeper into this new cycle.

In turn, that could lead to an extended period of outperformance for financials, industrials, energy, and materials, while at the same time giving a boost to small-cap stocks and regional markets such as Canada that have a heavy concentration in the sectors just mentioned. Still, investors should be selective moving forward.

In some instances, the cyclical trade is already running hot, and should it continue, greater emphasis will likely need to be placed on company-specific opportunities. In other words, fundamentals still matter and may be relied upon more after playing a diminished role in the earlier months of the recovery. And this doesn’t go for cyclicals alone. The value versus growth dynamic that has largely defined markets this past year isn’t as simple as it sounds.

Outperformance of one over the other can often change on a dime as it did for a few weeks earlier this year, and the lines between factors can easily blur over time. As such, “either/or” portfolios that lean too heavily in one direction are far more susceptible to bouts of volatility in the market than is a portfolio that uses a diversified “barbell” approach that capitalizes on the market’s biases without wild abandon.

Kevin McCreadie is Chief Executive Officer and Chief Investment Officer at AGF Management Ltd. He is a regular contributor to AGF Perspectives.

© 2021 by AGF Ltd. This article first appeared in AGF Perspectives. Reprinted with permission.

The commentaries contained herein are provided as a general source of information based on information available as of March 29, 2021, and should not be considered as investment advice or an offer or solicitations to buy and/or sell securities. Every effort has been made to ensure accuracy in these commentaries at the time of publication, however, accuracy cannot be guaranteed. Investors are expected to obtain professional investment advice.

The views expressed in this blog are those of the author and do not necessarily represent the opinions of AGF, its subsidiaries, or any of its affiliated companies, funds, or investment strategies.

™ The ‘AGF’ logo is a trademark of AGF Management Limited and used under licence.

Commissions, trailing commissions, management fees and expenses all may be associated with fund investments. Please read the simplified prospectus before investing. Investment funds are not guaranteed and are not covered by the Canada Deposit Insurance Corporation or by any other government deposit insurer. There can be no assurances that any fund or security will be able to maintain its net asset value per security at a constant amount or that the full amount of your investment in the fund will be returned to you. Fund values change frequently, and past performance may not be repeated. No guarantee of performance is made or implied. The foregoing is for general information purposes only. This information is not intended to provide specific personalized advice including, without limitation, investment, financial, legal, accounting or tax advice. 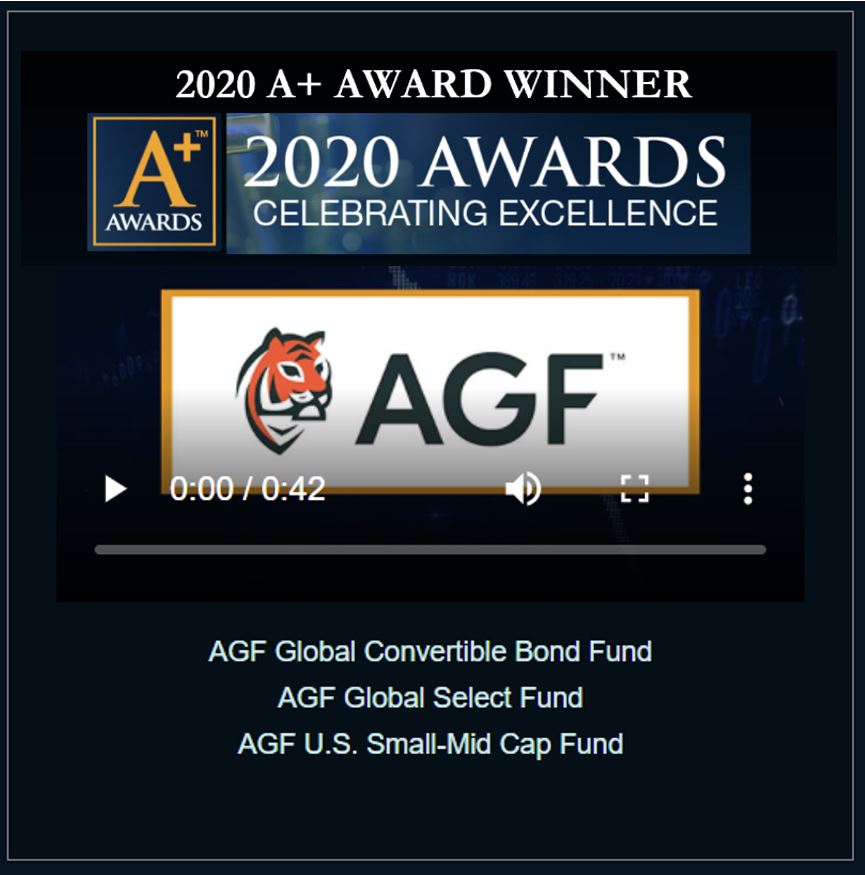