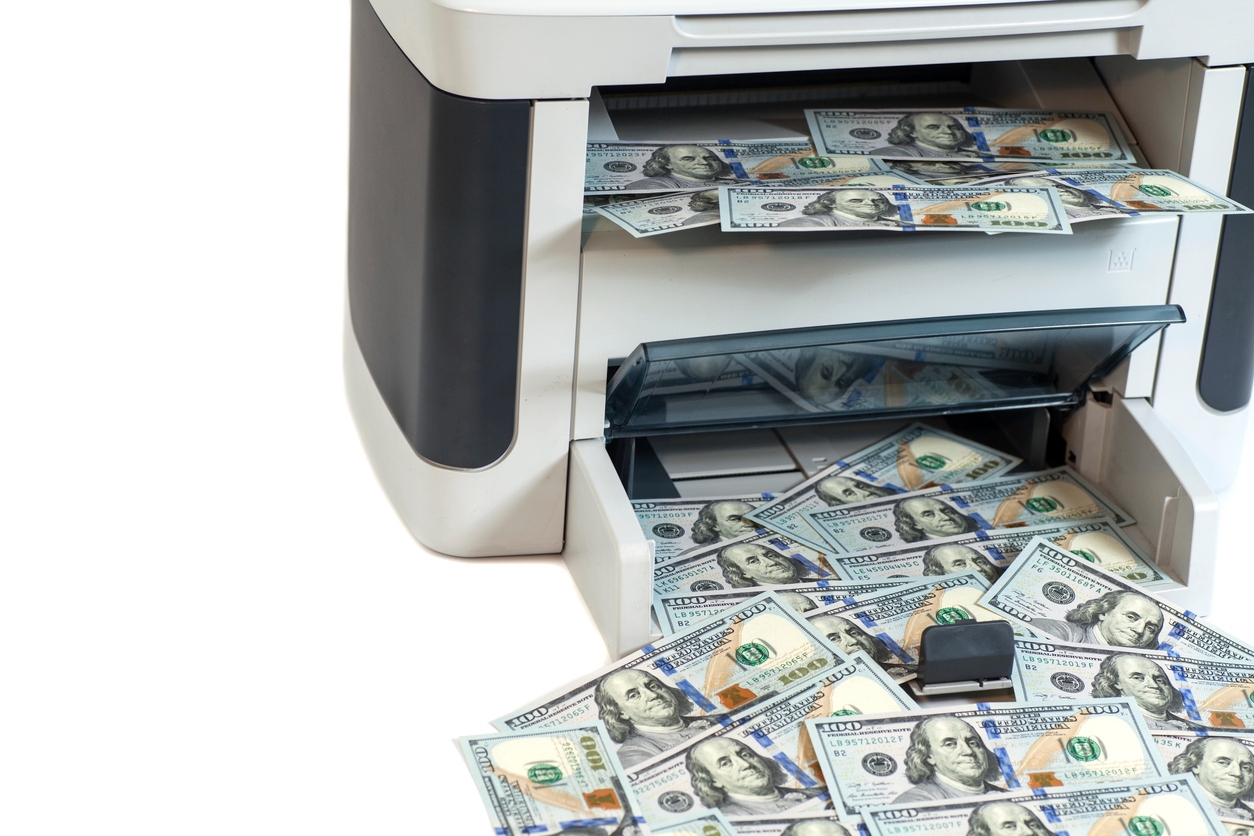 The scary part is what’s behind that monthly number

Markets hang on every new monthly inflation reading. But the most important question for the economic outlook isn’t what the next reading will be. It’s what’s actually driving inflation to the highest it’s been for decades – even when you exclude food and energy.

Demand and supply out of whack

It’s pretty clear that such high inflation means demand has got out of whack with what economies can produce without creating price pressures. Some argue that this is the fault of governments (too much spending) and central banks (leaving rates too low for too long). Of course, spending would have been lower – and there would be less inflation today – without all that. But what makes this situation so unusual is that overall spending in economies isn’t actually high.

Just look at U.S. GDP – a good indication of overall demand: it’s still below the level that, before the pandemic hit, it was expected to be at now (orange line vs. yellow line in the chart). Ditto in Europe.

The issue is more on the other side of the equation: since Covid, economies can no longer produce as much without creating price pressures. We’ve made an estimate of how much lower this “production capacity” is by looking at the relationship between prices and activity in the past.1 Given where core inflation is today in the U.S., we estimate production capacity could be as much as 7% lower than it would have been without the pandemic. That’s the gap between the orange line and the green dotted line in the chart below.

That’s a massive economic shock. It means that, to have kept inflation low, central banks and governments would have needed to implement policy that effectively offset half the reopening after the pandemic! 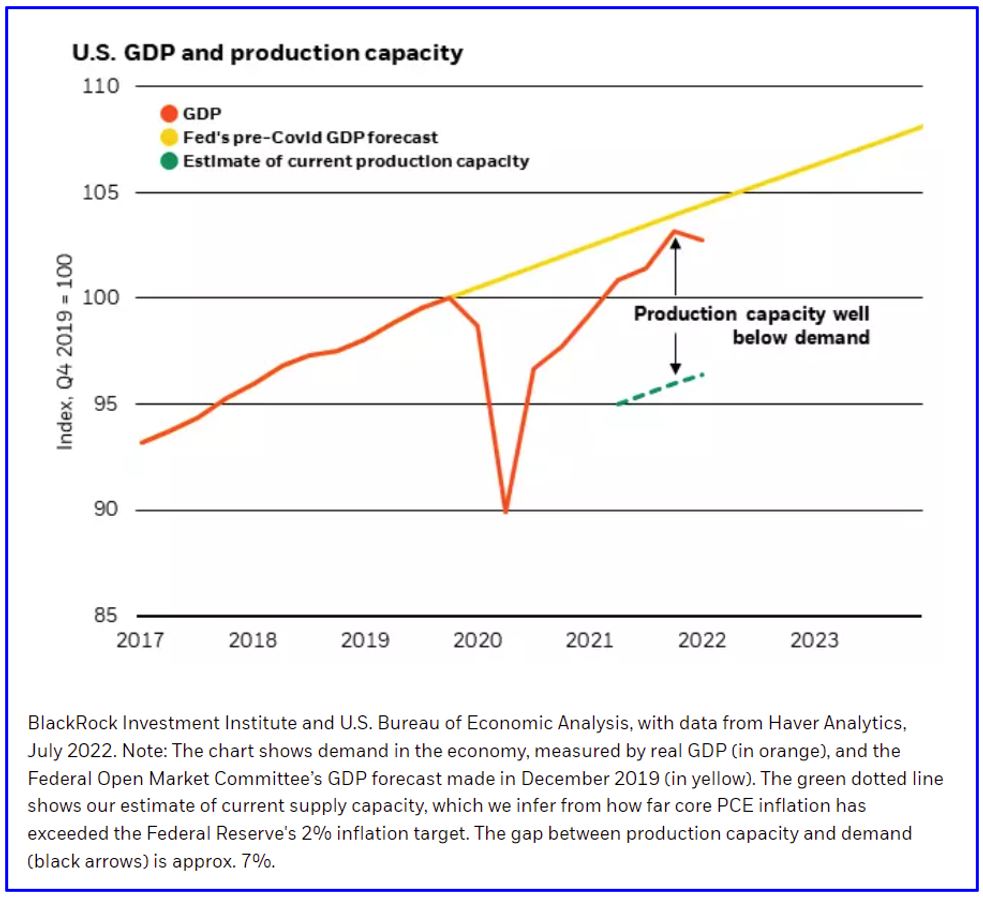 Ever since Covid, companies have been reporting supply chain disruptions and bottlenecks. But those reports are just the symptom of two much broader and deeper economic issues:

Why can’t economies produce as much?

Covid restrictions and health concerns meant people changed the way they spent in the pandemic: more on goods, less on services. In fact, the percentage of total consumer spending that went on goods had been falling for 18 years – incredibly, that decline was completely reversed in just 18 months (see “Huge spending shift” chart below).

There wasn’t an increase in overall consumer spending – it was a change in its composition. And the economy wasn’t set up to meet it. You can’t just convert a restaurant into a factory overnight. The production capacity of the service sector was effectively sidelined – think abandoned theatres, unused pizza ovens, empty taxis. So even though overall consumer demand had fallen, economies were trying to meet it with a production capacity that had fallen even more. Result? Widespread bottlenecks and reports of goods shortages. This spending shift probably explains a little over half of the fall in overall production capacity.

The other half? That’s likely down to the fact that employers are finding it more difficult to hire workers than they did before the pandemic.

In the U.S., many workers were laid off during the pandemic shutdowns. Or they left their jobs because of health concerns or needing to provide care for children or relatives. Many have yet to come back to the workforce. We think there are around 1.7 million fewer people in, or looking for, a job than would have been the case without the pandemic.2 In addition, the unemployed have, on average, been less able and willing to take available job openings since Covid. For example, if you were a musician before, you might not want, or have the right skillset, to now take a job in an office or a factory. That means that since the pandemic started, there’s been an unusually high level of open job vacancies relative to the number of unemployed people. That’s depicted in the “Harder to fill open vacancies” chart below.

It’s a similar labor story in Europe, albeit for slightly different reasons. Even though furlough schemes meant fewer people were laid off, many were put on reduced hours. Those hours still haven’t increased back to normal levels.3 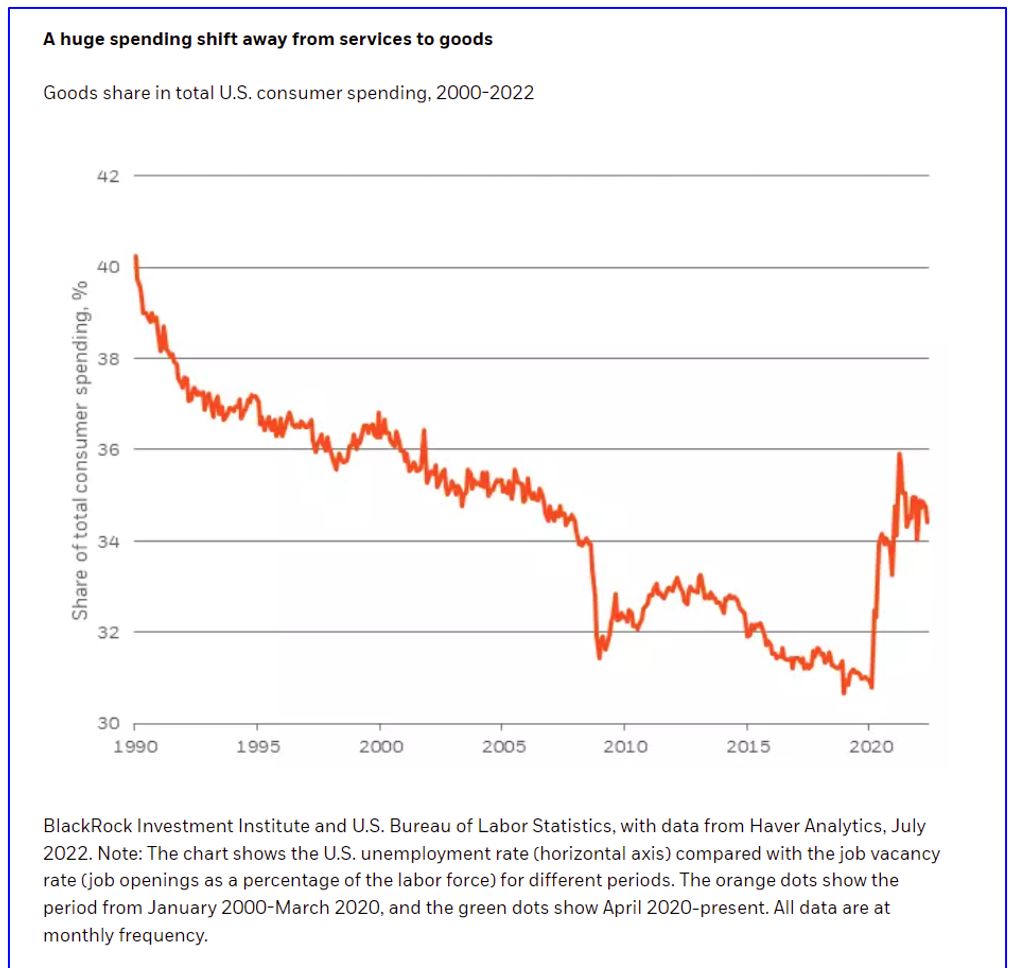 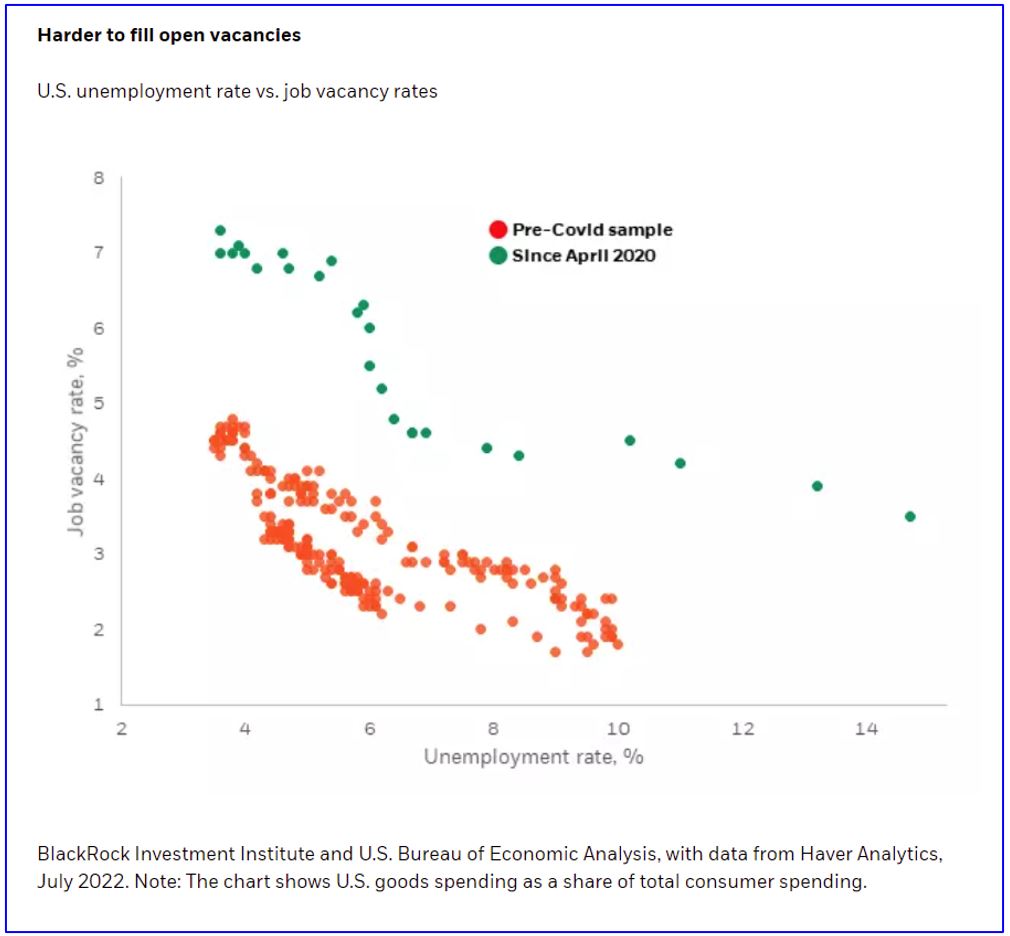 Why is low production capacity so scary for central banks?

Central banks don’t have the tools to increase the economy’s production capacity. Rate rises do nothing to encourage people back to work or undo the shift in spending towards goods. In fact, they might do the opposite.4 Rate rises can only reduce demand (by encouraging individuals and firms to save more and spend less).

That leaves central banks with a brutal tradeoff that isn’t really being acknowledged. They could raise rates to levels high enough to force demand down towards what the economy can comfortably produce now, and so ease inflation. Or they can sustain economic activity, but only at the price of living with higher inflation. They are between a rock and a hard place. That’s a dilemma many of them have not faced for decades.

The growth and inflation outlook rests to a great degree on whether production capacity is able to recover and also on which side of this inflation versus growth tradeoff central banks land on. In any case, we’re “back to a volatile future.”

1. When demand and production capacity balance, inflation should be 2% (without any other shocks). Based on that, we reverse engineer the size of the current imbalance given the gap between current core inflation and 2%.

4. Recent research (Guerrieri et al, 2021) says central banks should accommodate inflation if it is caused by a need to reallocate resources across sectors. Doing so allows prices to rise in sectors experiencing greater demand, relative to prices in sectors losing out. This helps economies to adjust and ultimately means production constraints are less persistent.

This material is not intended to be relied upon as a forecast, research or investment advice, and is not a recommendation, offer or solicitation to buy or sell any securities or to adopt any investment strategy. The opinions expressed are as of the date indicated and may change as subsequent conditions vary. The information and opinions contained in this post are derived from proprietary and nonproprietary sources deemed by BlackRock to be reliable, are not necessarily all-inclusive and are not guaranteed as to accuracy. As such, no warranty of accuracy or reliability is given and no responsibility arising in any other way for errors and omissions (including responsibility to any person by reason of negligence) is accepted by BlackRock, its officers, employees or agents. This post may contain “forward-looking” information that is not purely historical in nature. Such information may include, among other things, projections and forecasts. There is no guarantee that any of these views will come to pass. Reliance upon information in this post is at the sole discretion of the reader.

© 2022 BlackRock Inc. All rights reserved. iSHARES and BLACKROCK are registered trademarks of BlackRock, Inc., or its subsidiaries in the United States and elsewhere. This article first appeared July 14, 2022, on the BlackRock Investment Institute website. Used with permission.