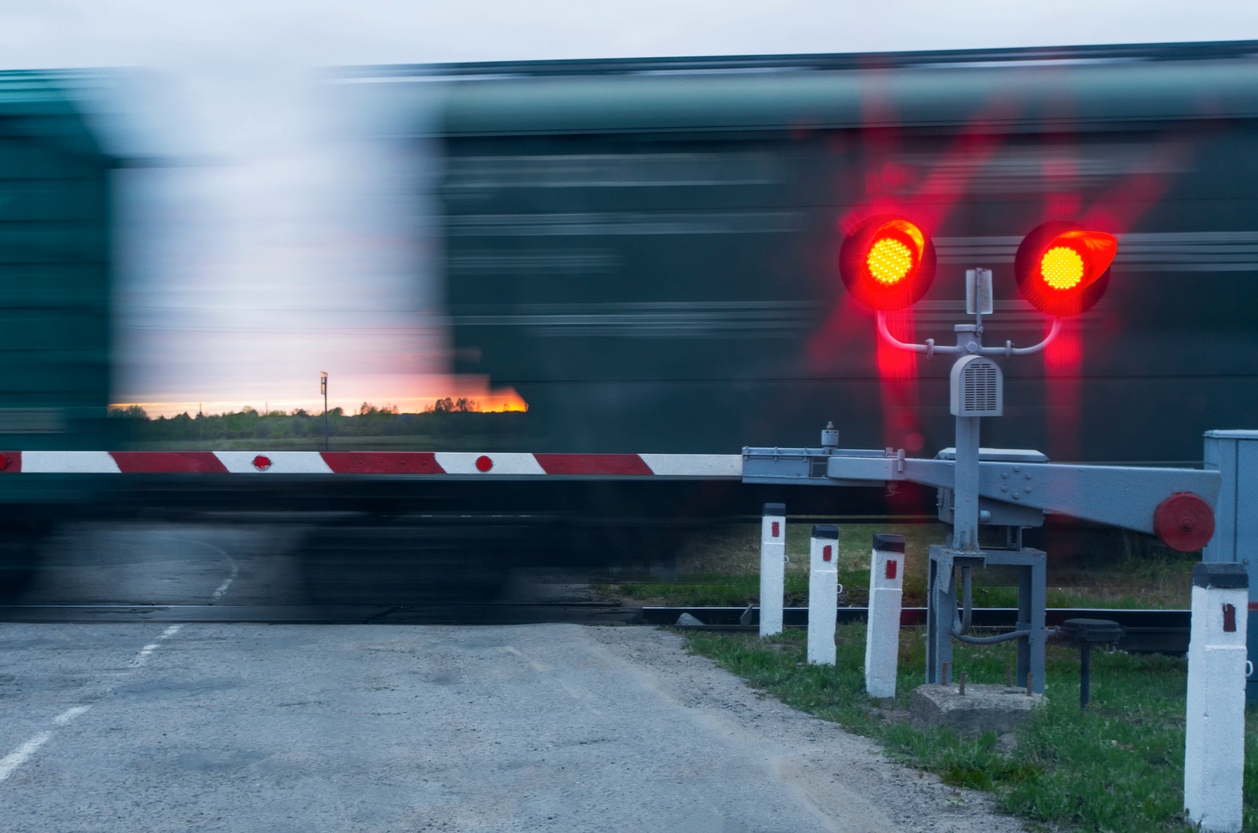 After months of fretting about soaring inflation, markets are now fully in recession-fear mode. Yield curves are flattening, credit spreads are widening, and equities are slumping – traditional recession alerts. Meanwhile, captains of industry and finance are warning of impending “hurricanes,” “super bad feelings” – and possibly even worse.

The proximate cause of the latest market selloffs was the May U.S. Consumer Price Index report, which came in hotter than expected in both headline and core terms.1 It also presented an unnerving picture of broadening price pressures across the economy. Investors responded by ratcheting up expectations for Federal Reserve (Fed) rate hikes, and the Fed responded by increasing rates 0.75% earlier this month, with another potential 0.75% in July and more increases beyond that.

Investors were already rattled by the recent monetary policy U-turn from the European Central Bank (ECB), which abruptly shifted from a cautious to an unambiguously hawkish stance. The ECB is now expected to raise interest rates a quarter-point in July, with additional and potentially larger moves in the autumn. The ECB will now join some 80% of major central banks in raising rates in 2022.2

History is unkind to the notion of “soft landings.” When central banks jack up interest rates, rising unemployment and recessions typically follow. According to a New York Federal Reserve study, in 11 out of 15 tightening cycles since 1955, the U.S. unemployment rate has risen, in most of those cases leading to recession.3 Tightening cycles are also frequently accompanied by financial stress, failure, or crisis. When inflation is this high and this many central banks are tightening simultaneously, the odds of slowing inflation without high economic or financial cost are even lower.

In this piece, we look at various financial and economic indicators to offer our own assessment of recession risk. We also provide insights into the likelihood of an earnings recession (i.e., an outright decline in reported corporate profits).

Our take? The rapidly shifting consensus is largely correct. While still not the certain outcome, the risk of recession is rising. And the odds of a corporate profit slump are even higher. Fasten seatbelts and hang on, there is turbulence ahead, and the landing looks dicey.

Over time and across countries, business cycles have been studied extensively. Given their frequency, a relatively large number of recessions provides sufficient observations to use statistical analysis to discern how financial and economic indicators perform immediately before, during, and after slumps. That allows statisticians to derive probabilities of future recessions over the next one or two years.

The Franklin Templeton Institute developed several models to gauge business and profit-cycle risks. The aim is not to forecast growth, inflation, or corporate earnings, much less the usual ups and downs of financial markets. Rather, our tools allow us to gauge when major cyclical turning points may be arriving, so that we can better advise our firm and its clients as they make their investment decisions.

Our work is based on careful analysis of how various financial and economic variables behave over the business cycle. Sifting through the candidates, there are about 10 indicators that have traditionally captured turning points in the economy: yield curves; credit spreads; consumer sentiment; business sentiment; broad measures of financial conditions; the labor market; purchasing manager indexes; oil prices, housing activity and – for the United States – state-level measures of economic conditions.

Using basic statistical techniques, these measures can be used individually or in tandem to calculate at any given point in time the probability of a recession over the next 12 months.

Models, of course, are not infallible. Changes in the economy can alter the lead and lag times between indicators and outcomes. They can even make certain indicators less predictive. For instance, well-known disruptions to global goods consumption, production, and distribution patterns due to the Covid-19 pandemic may diminish the reliability of manufacturing surveys, such as purchasing manager indexes, for recession probability calculation. In all cases, quantitative models must be augmented by qualitative analysis.

The cycle in pictures

For some readers, it may be useful to highlight how key recession metrics look today and how they relate to past business cycles. In the following series of charts, we look at six key metrics that signal a recession: U.S. Treasury yield curve; oil prices; consumer expectations; chief executive officer (CEO) sentiment; unemployment and rate hikes.

In Chart 1, we present the U.S. Treasury yield curve spreads alongside prior U.S. recessions, as indicated by the shaded regions of the chart. When the gap between shorter and longer maturity bonds flips (inverts) from positive to negative, the economy often dips into recession. Presently, the U.S. yield curve has only flattened but has not decisively inverted, so this is a key indicator to watch in the weeks ahead. 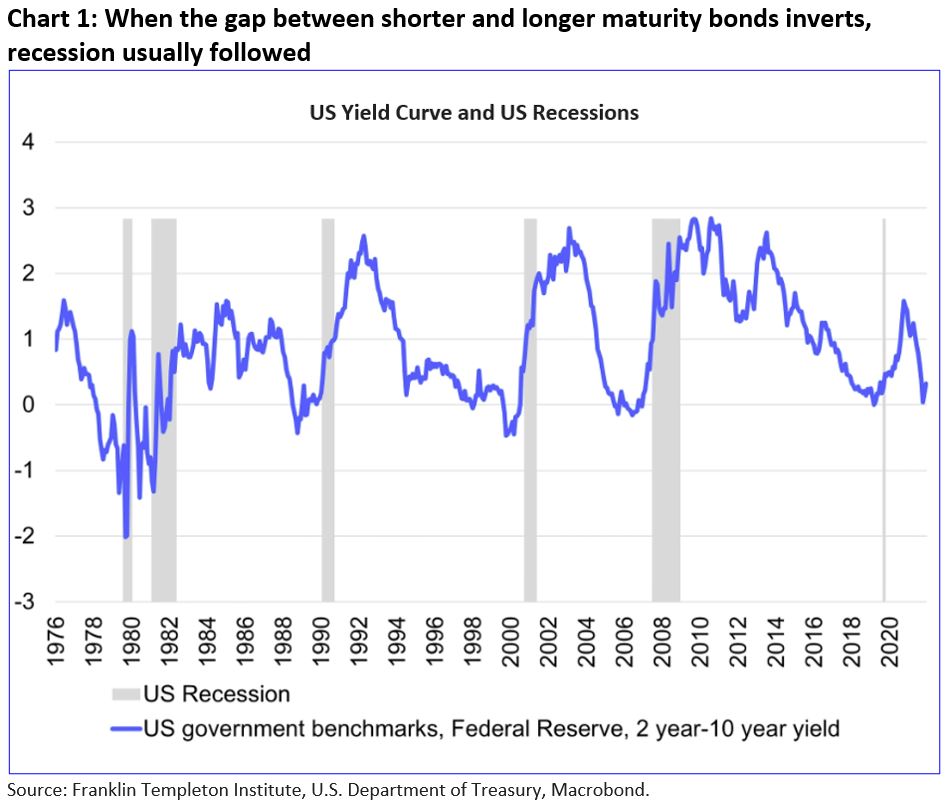 Oil price spikes have also preceded seven of the past nine U.S. recessions, as shown in Chart 2. Given the doubling of global crude oil prices over the past year, that ought to be a worrisome development for the year ahead. 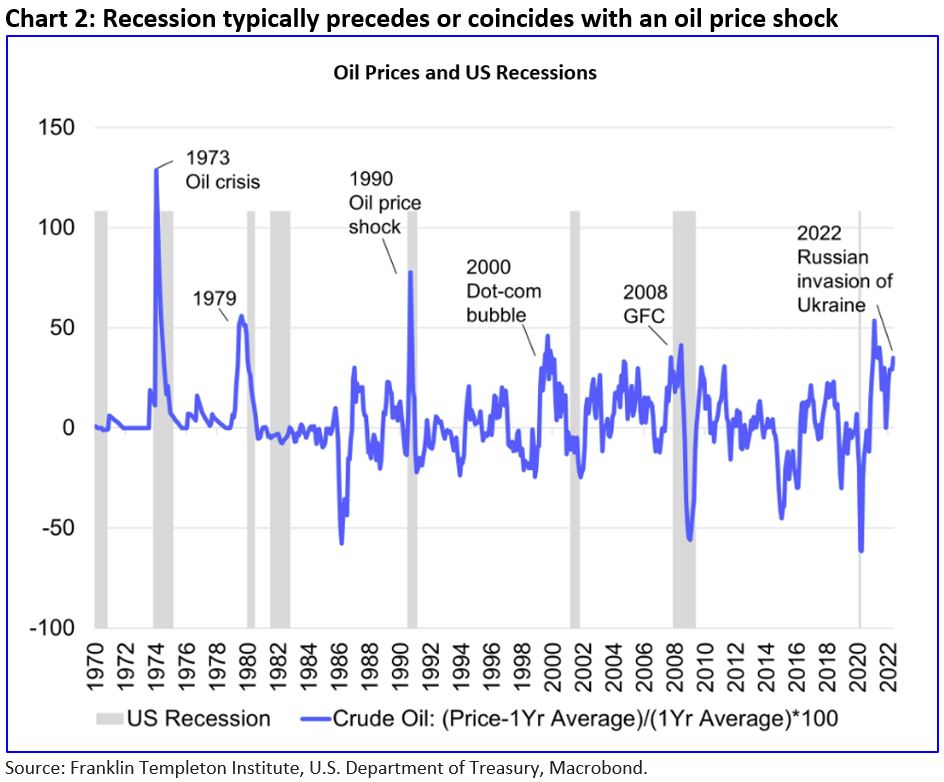 Given surging inflation, and in particular big jumps in the prices of everyday necessities, it is unsurprising that consumer sentiment has recently slumped. But according to the widely followed University of Michigan survey of households, consumer sentiment has now plunged to its lowest records since the university began gathering such data in 1952.6 That is astounding: U.S. consumers are more dismal today than at the worst points of the global financial crisis! And then again, perhaps that is not surprising, given that virtually all households are hurt by price increases that outstrip wage gains.

But more alarming is the relationship between consumer sentiment about current conditions and what they believe the future will hold (Chart 3). Similar patterns in the past have typically preceded recessions. Notably, consumer sentiment around big ticket purchases – cars, homes and household appliances – is now at record lows. 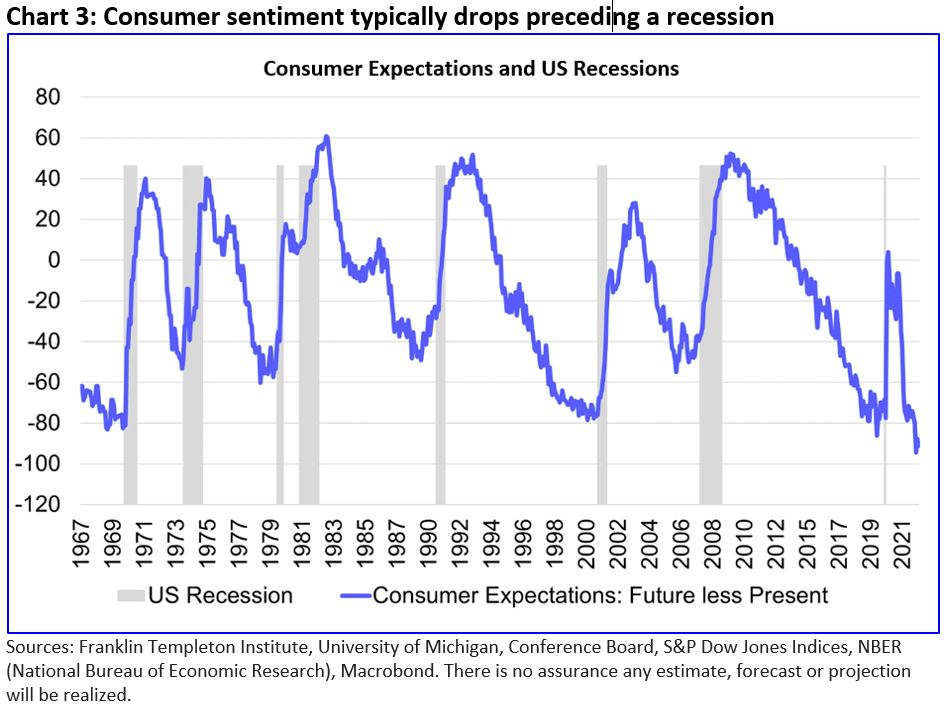 As noted above, leaders of industry and finance have also voiced concerns about the economic outlook. Those anecdotes are backed up by the data. The Conference Board survey of CEOs has plunged to its all-time lows, as shown in Chart 4. 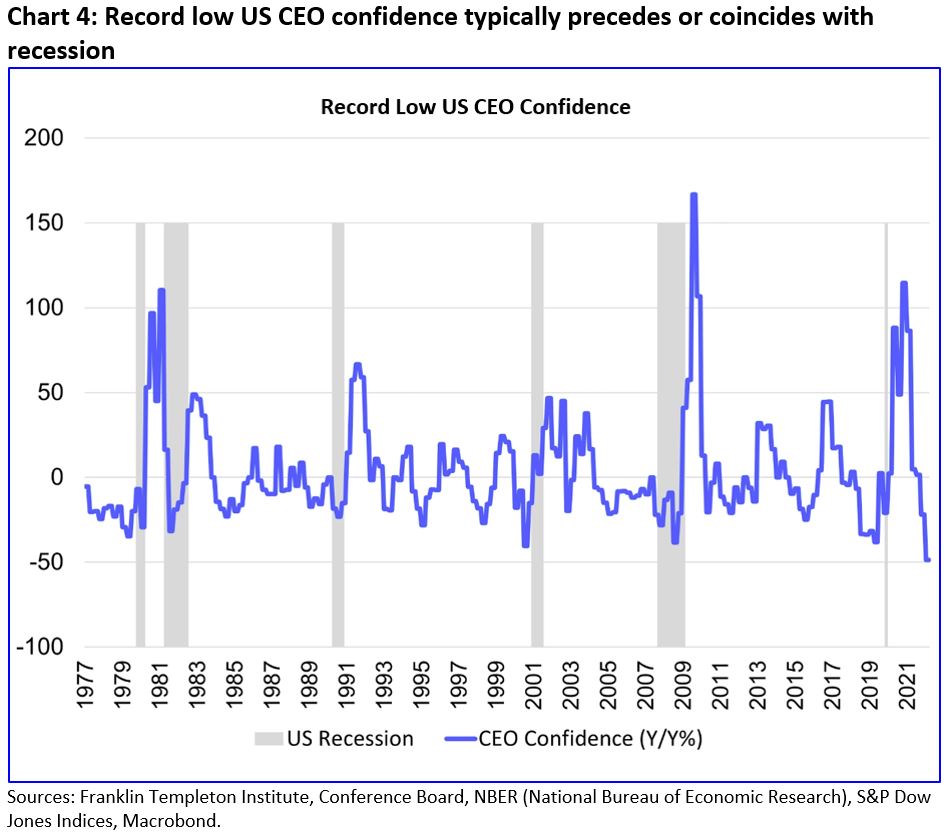 With unemployment at a near 50-year low, a strong labor market will sustain household incomes and hence spending, right?

Not necessarily. Low levels of unemployment are the norm prior to recessions, as Chart 5 indicates. According to research published by the Federal Reserve Bank of St. Louis, recessions typically start when the three-month moving average of the unemployment rate rises by a mere half percentage point from its cyclical low.7

Of course, given labor scarcities, particularly for skilled workers, firms today may be more reluctant than usual to lay off employees. Labor hoarding could, in theory, keep the economy out of recession for longer than usual. Of course, that would come at the expense of corporate profits, which is a double-edged outcome for equity and credit investors. 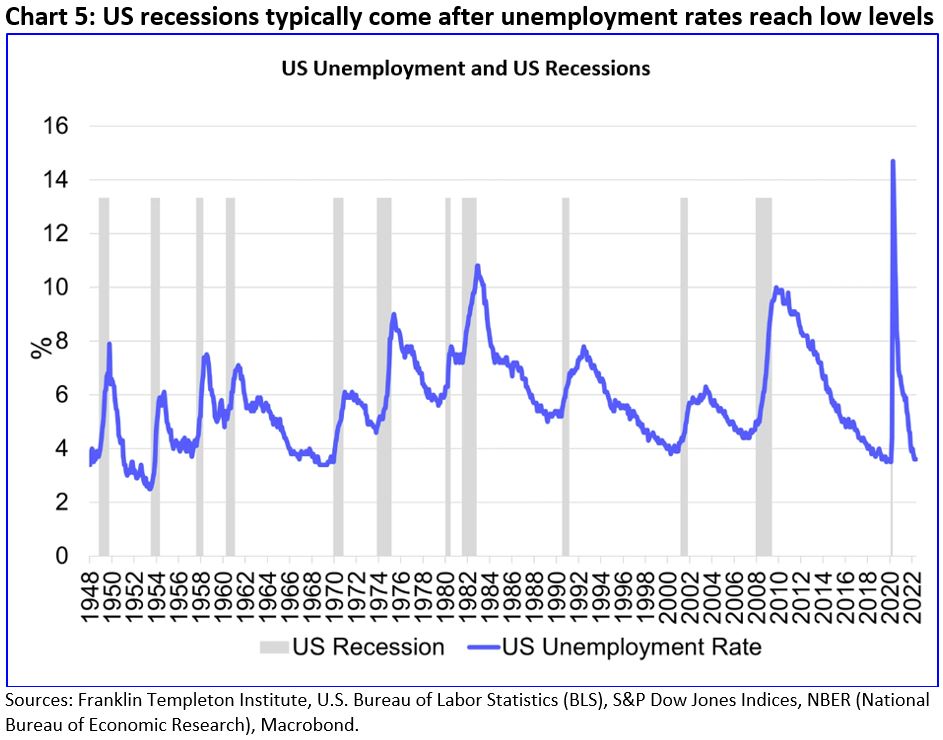 Another pushback on recession risk is that the consumer is still strong as shown in the elevated level of many purchasing manager indexes, including the U.S. Institute for Supply Measurement (ISM) index. Those relatively high readings, however, reflect a one-time surge in household demand for goods during the pandemic, reinforced by fiscal expansion, and enduring shortages of goods supply that continues to keep manufacturers busy.

But manufacturing is typically vulnerable to higher interest rates. And as Chart 6 shows, the future for manufacturers will be challenged by the large numbers of central banks now hiking rates. 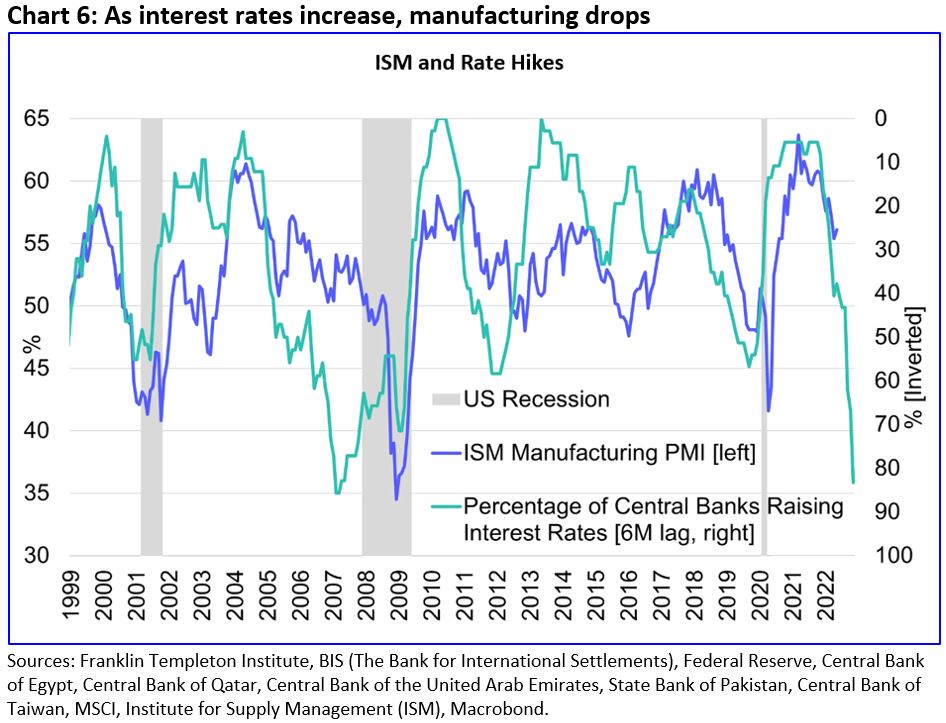 Finally, it is worth noting that rising risks of economic recession imply very high risks of a corporate profit recession. Aggregate profits growth is highly cyclical, rising and falling with the ups and downs of the economy. That’s because profit margins are sensitive to economic growth. Incorporating these and other factors into an earnings recession probability model, our work suggests that the odds of an outright decline in US corporate profits over the next 12 month are now 20% (up from 2% a year ago).8

In sum, markets are shaky, and investors are justifiably worried about the future. So, too, are business leaders and ordinary households. Our work confirms they have reason to worry. Current economic, policy, and financial conditions all point to a significant global economic slowdown, quite possibly a recession. And the outlook for corporate profits is dimming. It will take time and, perhaps, large dollops of good fortune to avoid economic and profits recessions in the year ahead.