How AGF adjusts for more volatility ahead

Market volatility is expected to remain heightened because of ongoing headwinds that include the Ukraine War and rising interest rates to combat higher inflation. How does that impact portfolio positioning going forward as compared to the beginning of the year?

That largely depends on an individual’s investment objective and their timeframe for investing, but for many investors, it still makes sense to be overweight equities in a 60/40 portfolio of stocks and bonds. For those investing globally, however, regional equity allocations today may need to be rethought in relation to what they were at the start of the year.

For instance, AGF’s Asset Allocation Committee (AAC) reduced its Emerging Markets (EM) exposure to neutral from overweight this quarter because of ongoing inflationary pressures throughout the developing world – in particular, as it relates to energy and food prices – and China’s latest round of Covid-19 lockdowns which has hampered economic growth in the country longer than originally expected.

On the developed market front, meanwhile, the AAC also downgraded Europe, believing the Ukraine War to be an especially large risk to European economies, whick are more dependent on Russian oil than other parts of the world. To offset that, the Committee remains bullish on the United States, which should continue to provide the best breadth of opportunities over the next few months.

In fact, despite the risk that higher U.S. interest rates pose to economic growth and U.S. corporate earnings over the course of the next few quarters, U.S. stocks seem generally poised to benefit from a combination of catalysts, including the release of pent-up demand for certain services as the country’s economy continues to re-open and from a strong labour market that will help U.S. consumers buffer higher inflationary costs in the near-term. At the same time, while the savings rate has begun to normalize from artificially high levels during the pandemic, deposit balances remain high and will likely be an aid to consumption despite higher prices.

The committee also continues to favour Japan, albeit not without reservations about the Japanese yen, which has fallen considerably since the year started and may elicit policy changes from the Bank of Japan that need to be closely monitored. Finally, the AAC remains underweight Asian stocks outside Japan, but increased exposure to Canada’s equity market for the first time in several quarters because of its large concentration in energy and materials stocks. More specifically, the Committee’s view towards Canada’s small-cap universe is more positive currently than it is towards the country’s larger companies. 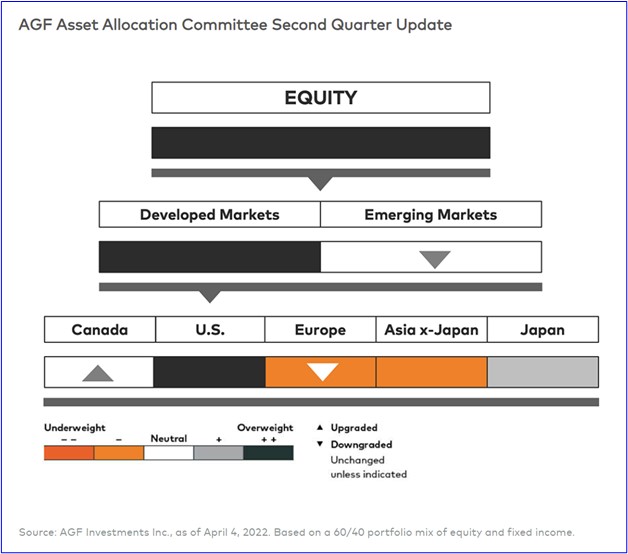 What about fixed income?

Again, there’s no one size fits all, but from the Asset Allocation Committee’s perspective, the biggest change since the beginning of the year has been reducing exposure to Emerging Market bonds, which was done mostly for the same reasons that EM equity exposure was reduced as well.

As for rate sensitive bonds, including government and investment grade corporate issues, the Committee maintained its underweight position – at least for now. While it’s agreed that bond yields have largely priced-in interest rate expectations going forward, it seems too early to say yields have peaked and that the current cyclical bear market in bonds is over. High yield bonds, moreover, continue to offer more upside in the AAC’s opinion, and remain the only overweight on the fixed income side of the model portfolio. 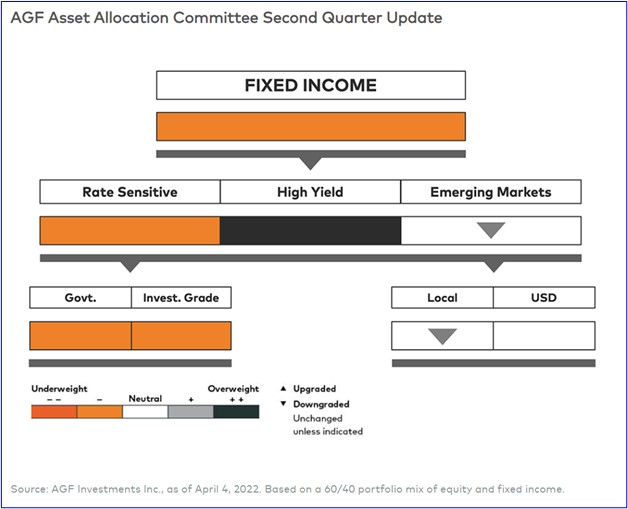 Beyond that, it’s also important to note the Committee’s cash and alternatives exposure, both of which are crucial elements in volatile markets like today. Remember, cash not only protects against potential equity and fixed income losses, but also keeps some of the portfolio’s “powder dry” to take advantage of buying opportunities when they arise.

Meanwhile, an alternative investment – whether that’s a long-short strategy that acts as an equity hedge or some other type of asset that is uncorrelated or has low correlation to stocks and/or bonds – can mitigate the risk of losses even more.

In short, the recent changes made by AGF’s Asset Allocation Committee are not for everyone. But given how tumultuous the market environment has been so far this year, adjustments of some kind or another are very likely warranted no matter what type of investor you are.

© 2022 by AGF Ltd. This article first appeared in AGF Perspectives. Reprinted with permission.

The commentaries contained herein are provided as a general source of information based on information available as of April 25, 2022, and should not be considered as investment advice or an offer or solicitations to buy and/or sell securities. Every effort has been made to ensure accuracy in these commentaries at the time of publication, however, accuracy cannot be guaranteed. Market conditions may change investment decisions arising from the use or reliance on the information contained herein. Investors are expected to obtain professional investment advice.

The views expressed in this blog are those of the author and do not necessarily represent the opinions of AGF, its subsidiaries or any of its affiliated companies, funds or investment strategies.

®The “AGF” logo is a registered trademark of AGF Management Limited and used under licence.